Our time here in Hluhluwe is coming to a close and we have never felt three weeks fly by so fast. It feels like we know every road, every alley of this place and it will be a strange experience leaving. But now we are getting ahead of ourselves as there has been a lot of events these past couple of days.

On wednesday we first drove back to Mfundabasha Primary School to finally return the tablets that we had been helping them with. We showed all the teachers the different applications that we installed and briefly talked about how they could be used in the education. They were really appreciative and thanked us very much for our effort. After playing some with the children we moved on to the second school for the day. 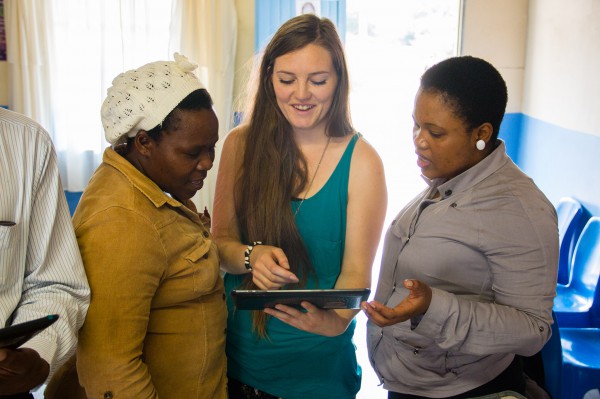 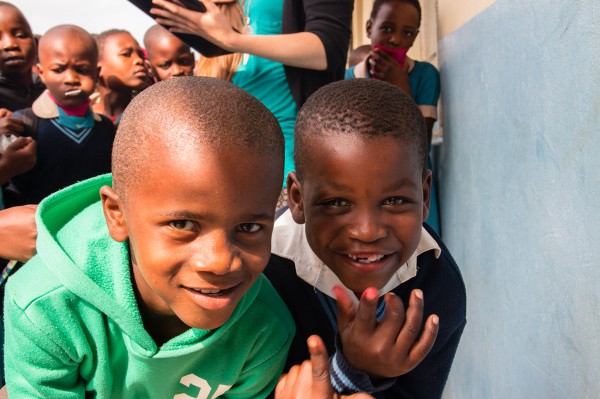 We drove for an hour to Emthulasizwe High School which had recently been the receivers of a donation of laptops. The only problem for them was that these computers used Linux, something they were barely familiar with. Upon arrival we met up with a very competent computer teacher who showed us the computers. Sadly they lacked the admin account for the computers so they could not install the dictionary and encyclopedia programs they needed for education and research. However after some digging around Elin found that these computers also had offline wikipedia installed, although with a smaller library. After updating the program with a newer and much bigger version we walked the teachers through how to use it and quickly assessed the situation of their old stationary computers. After this worthwhile meeting we went home with our stomachs rumbling. We had once again forgotten to eat lunch.

The next day we got up with a small dose of sentimental sadness: this day would be the last day that we visited a school on our journey. Fortunately for us, it proved to be a quite eventful day. When Simon and Elin got up with the same amount of vigor that they always show (read: 30 minutes after Björn is prepared to get into the car) they found themselves chocked: Björn had not yet risen from his bed. He had infact caught an annoying cold and had slept in for the first time this journey. Not one to be beaten down by some bacteria much smaller than him, he still got up for the final school visit.

When we arrived at the school it became apparent that a misunderstanding had been made. The teachers wanted us to hold a lesson for the pupils whom had never touched a computer before. As we normally educate teachers, this came initially as a shock but after some consideration we came to the conclusion that we should at least try it. So we sat down for an hour and prepared the lesson in computer basics. Nervous as hell (except for Björn whose blasting headache numbed all other senses) we went in for a 1,5 hour long lesson for grade 12. With Björn going in and out as his cold decided, Simon and Elin bravely went and conducted their very first lesson ever. To our surprise, the moment the learners came into the class they started playing with the computers and all seemed to have used a computer before. When we asked the computer teacher she said that many of them had used computers to play games. This resulted in that our preparations went straight out the window and an improvised class in how to write a word document ensured. After a while however it became apparent that the skill level varied drastically. While some indeed seemed to be familiar with computers others struggled to use the mousepad and had no idea what we meant by “clicking” something. But the lesson went on, by very slowly introducing new concepts and following it up with going around for a few minutes helping everyone. In the end it was a very unstructured and chaotic lesson which gave us a lot of respect for all the teacher in the world. The learners however were still very pleased and the teachers thanked us very much for our effort. Without this lesson the learners would have never touched a computer before getting to university or applying for a job which makes a huge difference. When leaving the school, we all (well maybe except for Björn whose headache only had gotten worse by the fact that we forgot to bring water to the school) walked on clouds. It was an awesome experience that we won’t forget.

For our last day we went to the Star for Life office to have a long meeting with JD who is the one that is responsible for this project from Star for Life’s side. It was a lovely meeting where we mostly discussed the distribution of the computers that will be done in our absence. JD made us feel very certain that he has a great understanding of the situation and what needs to be done. We couldn’t be more comfortable about someone else taking over the responsibility for the distribution and we are sure that he will do a great job of seeing that the computers get to the schools that need them the most and will make best use of them.

Now for the final night we were having a farewell dinner with our hosts and then packed our bags to head for the airport early this morning. It has been an awesome experience being in Hluhluwe and we would like to think that our efforts these last few weeks have really made a difference, and we are sure that the computers once distributed will help even more. With all this in mind we would like to give a big ‘Thank you’ to all we met during this year and who helped make the project possible:

Older CESA members – For your tireless efforts in helping us with everything. We owe you big time.

Opera, Findwise and the IT program – For your generous donations which made this project possible. We literally could not have done this without you.

Göteborgs Stad (especially Glenn) – For your enormous contribution with all of the computers. It is a huge part of the project and we offer you the warmest of thanks.

Chalmers fastigheter – For lending us one of your rooms in our time of need. We will miss that basement that slowly became our second home.

Samuel Bengmark – For being our guide and mentor over the course of this year. We hope to meet you in person really soon!

Our hosts Tracey and Alec – For making Hluhluwe feel like home with all the safaris, walks, dinners and nice conversations. We will miss you dearly and hate that we missed taking a picture with you!

And last but not least, Star for Life – For your hospitality, kindness and dedication to the project. Working with you these past weeks has been an absolute pleasure and we wish you all the best with your own endeavours.

With all that said we are now at the airport in Durban waiting to board our flight to Cape Town. Thank you for following us these past few weeks, it really has been an amazing journey!

One thought to “Our Final Adventures”